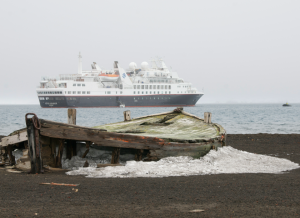 Located right at the ends of the world, Antarctica has a very young human history. It is the only continent on which the first buildings remain standing, and much of the early exploration of the place is documented using photography and film footage. These days the cameras we take down south are digital, but the icy landscapes remain the same. There is no better place to explore the layers of our interaction with Antarctica, from the days of black and white through to today’s high definition technology, than Whaler’s Bay, on the Antarctic Peninsula.

Whalers Bay is located inside an active caldera known as Deception Island. Whenever we visit Deception Island, my job is not hard – I get very excited about both history and volcanoes. The area remains volcanically active, with steam often visible at low tide. That geological activity forms part of the human story as well, because it was the series of eruptions in the late 1960s that eventually made the British base on the site uninhabitable. We head ashore, often amidst horizontal snow, to get a glimpse of the past.

Whaler’s Bay is named for the whaling ships that used to dock in the shelter of the harbour. A shore based station was also in use from 1911-1931, and the remnants of the boilers that were used to render down blubber are still in place. Today, wind beaten timbers pierce the thickening skies and rusting machinery slowly flakes away to red. Behind the boilers stand several more recent buildings, erected during the wartime ‘Operation Tabarin’ to establish a British presence in the Antarctic, and to prevent any of the Allies’ enemies from gaining a foothold in the area. The erection of the buildings was also in response to repeated assertions of sovereignty from Chile and Argentina, two nations that lay claim to the same slice of the Antarctic Peninsula as Britain. The wooden huts were used for scientific research following the war, and it was only when a lahar came through to destroy the base that the site was abandoned. For those who think history is boring, think again – at Whaler’s Bay you are essentially looking at a secret wartime military base that was destroyed by an erupting volcano – all that’s missing is James Bond himself.

These days it is people like us who come to visit Whaler’s Bay – tourists. It’s a great spot for bringing the past to life, but we’re part of the story too. As we snap photos of the rusting boilers and decaying British base, we are adding our own layer to this palimpsest of a place where whaling, politics, science and tourism come together at the bottom of the earth.

Originally published in The Ashburton Guardian