This past week I have been at the SCAR Humanities and Social Sciences Expert Group meeting in Fort Collins, where the theme of “Wilderness” was on the agenda. Antarctica is often described as the “last great wilderness”, but both the concept and the term “wilderness” have been hotly debated over the past 50 years. We were in Colorado, at the foot of the Rocky Mountains, to learn more about the origins of the idea in a US context, and to compare the local wilderness with the expanse of the south with which we were also much more familiar. 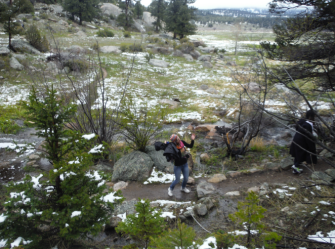 Day 1 dawned wet and cold, but that didn’t deter our (largely antipodean) contingent. In fact, the promise of snow in the hills had us raring to go. We headed up into Rocky Mountain National Park to go for a hike, spot some wildlife, and hear from a ranger about the “Wilderness Act” and its implications in terms of parks management today. The main message? There are a whole range of stakeholders, the term has been highly politicised, and “wilderness” can be interpreted in different ways depending on who is in power at the time. So, it’s complicated. That set us up nicely for the next 3 days, where complication was also on the agenda – only this time, the contested term was being applied to a contested place, south of sixty degrees: Antarctica.

We heard from Maria Consuelo Léon Wöppke about her work with diaries, where she examines “Chilean Perceptions of Antarctic Peninsula Wilderness,” and Daniela Liggett about wilderness values. The idea of wilderness has changed over the years, and Daniela identified four distinct periods; paleolithic, ancient, modern and postmodern. Throughout these periods we see a shift from the unity of people and nature to the ancient view of wilderness as a place of spiritual testing. In the modern era there is a separation of humankind and wilderness/nature, characterized both by the domination of natural systems and a simultaneous appreciation of the romantic idea of the wild (e.g. the concept of the “noble savage”). Finally, the postmodern view sees humanity as part of a broader ecological system. So how does this fit with the “wilderness value” mentioned in the Madrid Protocol? That’s the million dollar question (grant money, anyone…?!)

Daniela also mentioned the issue of language, and how concepts don’t always directly translate. In English, wilderness has certain connotations (particularly political connotations) that other translations – such as vida silvestre, villmarkskarakter, Ursprünglichkeit, région sauvage – do not. So, wilderness is contested. It’s also a subject that interests a range of people, particularly when discussed in relation to Antarctica. Dr Alan Hemmings delivered a public lecture on the theme “Wilderness in an age of increasing Nationalism,” which was well attended by members of the local community. More on that later.

On the final day I also got the chance to plug our Humanities and Social Sciences Expert Group website – if you haven’t seen it yet, it’s worth a look. We’re wanting to build up the membership database, and add more profiles of Humanities scholars working on Antarctic issues. Further Research Output Summaries (like this wilderness one) are on the agenda, as is a continued social media presence (basically, that means I’d better keep logging in to our twitter and facebook pages). If you or any of your colleagues think this sounds promising, please do get in touch!

This is very much a blow-by-blow account of what we did, and far more has been left out that included. My brain is still buzzing from the fantastic presentations, so I’m yet to synthesise all the themes and settle down to pen any long-term insights. Hopefully they do arrive at some point. For now, I’m heading straight to Milwaukee to delve into the American Geographical Society (AGS) archives – so Watch This Space!