Ever since the Heroic Era of Antarctic Exploration, it has been common for newspapers and magazines to be published on The Ice. Scott, Shackleton and Mawson all took printing equipment south on their respective expeditions, and the resulting publications turned out to be valuable fundraising tools when they returned home. More recently, New Zealand artists and writers Bill Manhire, Nigel Brown and Chris Orsman wrote, published and bound “Homelight” whilst visiting Scott Base as Arts Fellows. It wasn’t only those who headed south who were publishing about life on the continent, however. I’ve been looking into the phenomenon further at the AGS Library over the past few weeks, and the Little America Times is worth a mention. 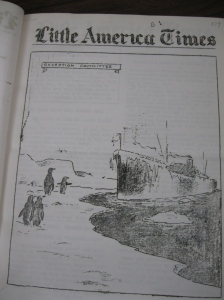 The Little America Times was published by August Horowitz between 1933-1935. Intended for the friends and families of Antarctic expeditioners , the monthly editions chronicled the exploits and discoveries of both Admiral Byrd and Lincoln Ellsworth’s South Pole expeditions. This is a fascinating compilation of articles, cartoons, radiograms and other collected tidbits collected from the media at large.The cartoons are great, as they often go the same way as advertisements, discarded as ephemera. Of course it’s all presented from his point of view, so the articles that make the cut are those Horowitz deems both suitably important, and of interest to the families of the men. If you keep that in mind, it’s a great resource, tracking what was trending, and collating some of the more obscure Antarctic stories into one place (this is where I first read about the Antarctic cows).

Horowitz mentions the fact that periodicals flourish down in Antarctica, and details the press situation at Little America:

First there is the Radio Press, a daily newspaper made up of items of world interest picked out of the air. Second is the Barrier Bull, edited by a Harvard man and a Yale man and has a circulation of eight typewritten copies. Its editorial policy is “insults for all.” Third is a monthly journal of the expedition. The Snow Shovel.”

There are three more leads for me to follow up right there – cue activation of document sleuthing skills, fuelled by good old polar obsession. I’ve found plenty more material in the archives that I’m working through at the moment, identifying key themes and how the details might fit into my advertising project as a whole. In the meantime, I’ll leave you with a republished gem that originally appeared in The Chicago Tribune. (Line 16 is a personal favourite…)

Down to the South Pole he’s going to sail,
Where they can’t get him by phone or by mail,
Where there’s no autos, no police, nor red lights,
Where there’s no radios, no jazz, no new styles,
Just penguins and icebergs for thousands of miles;
But no beauty queens, no chorus girl prancers,
And it’s probably too cold for any fan dancers.
No income tax or sales tax to pay,
And joy, oh joy, there’s no NRA.
No RFC, no Brain Trust, no comic papers,
Only whales and sea gulls cut fancy capers.
No baseball, no tennis, no golf or football,
Just the sea and the ice and the silence, that’s all.
No divorces, no movies, no bonds,and no stocks,
Nothing down there but just piles of rocks;
The silence would really appall a sheep herder,
There’s never a really first call, high grade murder.
When I think where he’s going with envy I’m stirred,
Oh gosh! How I wish I were Admiral Byrd.