It’s not only in the world of advertising that Antarctic links come to light – sometimes they emerge in the most unexpected of places. Reading the news this morning, it was an article about the new New Zealand currency design that caught my eye:

In fact, this was the top news story for a while, with the omission of Hillary’s trusty Massey Fergusson tractor labelled “a disgrace”: 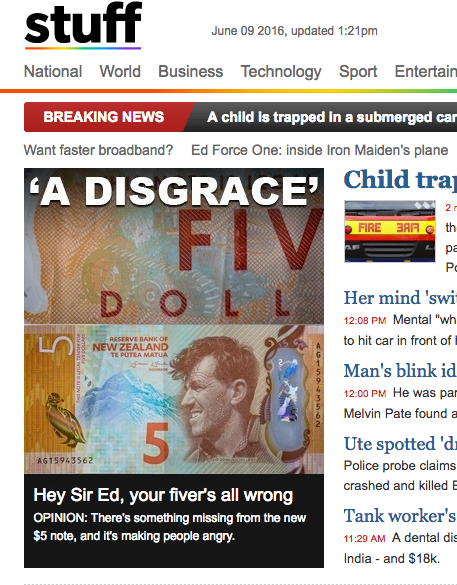 What’s this all about, you may ask? Well, Sir Edmund Hillary has long been a hero and role model figure in New Zealand. Famed for being the first to reach the summit of Mt Everest along with Sherpa Tenzing Norgay in 1953, Hillary also led the Ross Sea Support Team laying depots for Sir Vivian Fuchs’ Commonwealth Trans-Antarctic Expedition (1955-58). Having lain the depots, Hillary continued on to the South Pole, and on 4 January 1958 his party became only the third ever to have travelled overland to 90 degrees south (the other two being Roald Amundsen and Robert Falcon Scott’s teams in 1911/1912).

Unlike the explorers of the Heroic Era, Hillary didn’t manhaul supplies. Instead, he was using Massey Fergusson tractors to make the trip. This is a favourite question in pub quizzes – no one leaves any ship  I am on in the summer without being able to identify the tractor brand! There’s even a Ferguson Glacier in the McMurdo Dry Valleys, named in honour of the machines. One of the original tractors was recently purchased (2015) by Christchurch’s Commodore Hotel, Canterbury Museum and the Antarctic Heritage Trust, and will be displayed at the hotel and later at the museum. (Another of Hillary’s machines, the Tucker Sno-Cat, is currently on display as the centrepiece of the Canterbury Museum’s Antarctic hall.) In 1992 New Zealand currency was redesigned, with Sir Ed’s face – and an image of the trusty tractor – gracing the $5 note. The Fergusson TE-20 has thus entered into circulation in New Zealand life quite literally.

(Can you spot the vehicle? It’s just behind the “Five Dollars” text): 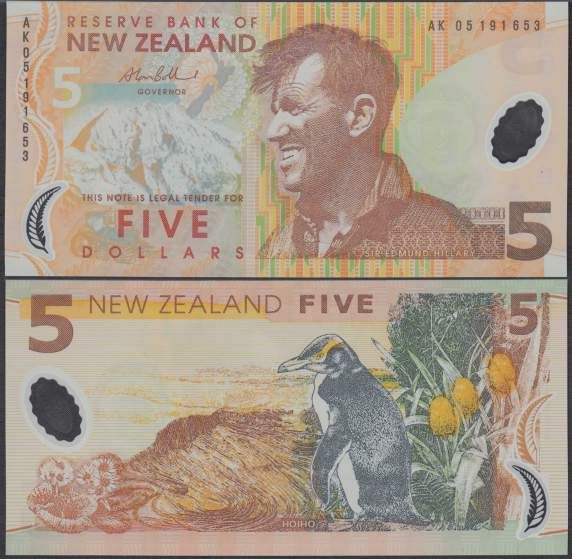 The reverse side of the NZ $5 note also has southern connections, as it features an image of the Hoiho Yellow-Eyed Penguin, and a scene from Campbell Island, one of the New Zealand sub-Antarctic islands.

The controversy that has erupted in New Zealand centres around the tractor as an agricultural symbol. Newly released bank notes feature Hillary, but not his mechanical steed, leading to comments that “they got rid of the one thing on our money that reminds us of our farming heritage.” It’s a fair point for a nation that’s long had agricultural exports as a mainstay of the economy. From my point of view, this is an interesting discussion – what do people see in the tractor? What was it intended to refer to, and how has it been read? “Never read the comments” may be rule number one of the internet, but in the case I am curious to see how public opinion pans out.

It’s also interesting to turn to the Massey Fergusson manufacturers themselves and take a look at more recent Antarctic links – the brand also sponsored the “Antarctic 2” expedition to the South Pole in late 2015, and drew links between Hillary on the TE-20 and Manon Ossevoort on the MF5610:

“The adventurous 2014 Antarctica2 mission aims to drive a Massey Ferguson MF 5610 agricultural tractor on a 5000 km round trip from the coast of Antarctica to the South Pole. The quest echoes the achievement of explorer Sir Edmund Hillary who led the first mechanised expedition to the South Pole in 1958 using Ferguson TE20 tractors”

The offical expedition  website makes explicit the brand’s role in both expeditions, explaining “they both put their faith in Massey Ferguson tractors to help make it happen.”

This tractor is not just a tractor, then. Rather, it also serves as an important relic of Antarctic history for New Zealanders, a symbol for New Zealand’s framing history, and a unique promotional point for the brand in question. Will it be missed? The domestic “outrage”suggests yes, if only until the next headline comes around to bump this one off the news cycle.