It’s winter in Tassie. That means dragon smoke breath in the mornings, snow on the mountain, and winds fresh from an Antarctic holiday whipping through the trees. It also means puffer jackets are obligatory, thanks to strange Australian and NZ tradition of building weatherboard houses with little or no insulation. The acceptance that for several months of the year, inside temperatures will be equal to or lower than those outside sets the scene nicely for this advertisement, which has been playing on TV, radio, and as an image over the past few weeks: 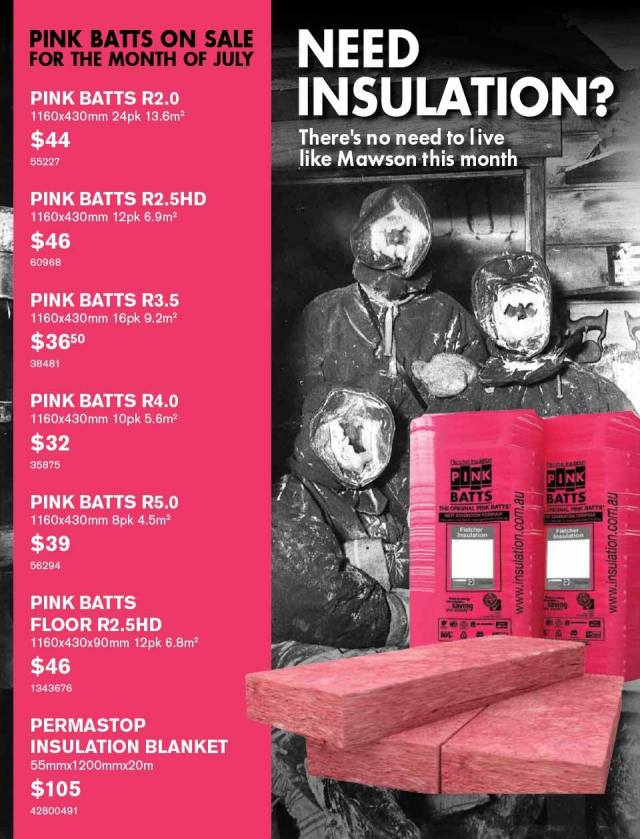 That’s right folks, “there’s no need to live like Mawson this month.” If you’re not from Australia, you may well be wondering who this “Mawson” fellow is. In terms of Australian Antarctic history, he’s a pretty big deal – while the likes of Scott and Amundsen were racing across the polar plateau to the South Pole during the Heroic Era of exploration, Mawson was charting the Antarctic coastline south of Australia on the Australasian Antarctic Expedition (1911-1914). Australia’s claim to 42% of the continent (“Australian Antarctic Territory“) is based on this mapping. He was also an influential geologist, has  mountains and buildings named after him, and appeared on the Australian $100 note between 1984-1996.

Why put an explorer-geologist on an advertisement for pink batts insulation? Well, Antarctica is pretty cold; the ice round the faces of the men pictured makes that much clear. The advertisement also banks on the audience recognising Mawson as an important historical figure. His hut at Cape Dennison – located at one of the windiest places on earth – was known as the “Home of the Blizzard,” and was a prime example of where insulation would behave come in handy. Antarctica is not mentioned at all in the advertisement, but the mention of Mawson makes the association with the cold continent clear. The black and white photograph also provides a contrast between the sepia days of the Heroic Era, and the bright pink batts that will come to your rescue by trapping in the heat, creating a colourful distance between then and now, there and here, and cold and warm.

We are the lucky ones here in Hobart, with under-floor insulation already installed. Sure, it snows occasionally, but icy hoods below further south. Still, it’s good to know that pink batts have out back, and that our Antarctic jackets are hanging by the front door, just in case…