Women of the Antarctic

As recently as 1968, Antarctica was being described as the “womanless white continent of peace,” and heralded as the final bastion of heroic masculinity. “The Ice” was a place for man-hauling and beard-growing competitions, where the sepia tones of the past blurred into the present. These days that is no longer the case, and many leading researchers who conduct work in and about the Antarctic are women. Their names are not often known, however, and their contributions to polar science, education and logistics have had a lower public profile than those of their male counterparts.

In mid 2016 Dr Jan Strugnell and Dr Thomas Shafee from La Trobe University, Australia, decided to take action by shining a spotlight on women’s achievements in the Antarctic. A ‘wikibomb’ event was planned, with the support of Wikipedia’s Women in Red and a team of volunteers, and the goal of publishing 100 new profiles about renowned Antarctic women. The project aimed to recognise and profile the work of women in Antarctic research, to help redress some of the gender bias that is prevalent throughout Wikipedia (fewer than 17% of all biographies are about women), and to provide more visible female role models. 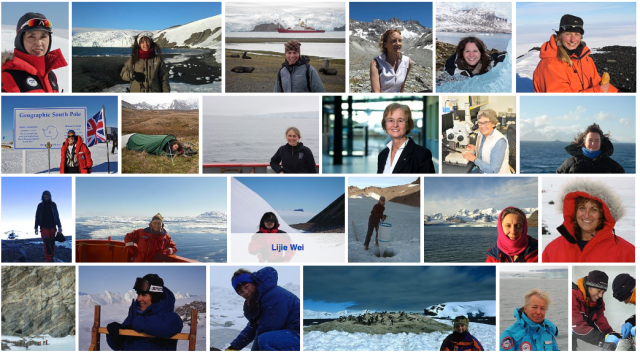 For Dr Strugnell, the element of visibility was particularly important. She noted that while 60% of early career Antarctic researchers are women, only 10% of awards, prizes and papers at scientific conferences were awarded to (or presented by) women, while women comprise only 11% of medal winners from the Scientific Committee on Antarctic Research. Fellow organising committee member Dr Justine Shaw (University of Queensland) explained how “There is a leaky pipeline from female students to science leadership roles across all disciplines.” This makes it more important than ever to profile the “many great and generally under-recognised female Antarctic research role models” who are spread right across the world, and to celebrate their achievements in a visible manner.

In order for young women to see polar research as a viable career path, they need to be able to see successful women who have gone before them. The wikibomb event certainly helped on this front; five of the Antarctic researchers profiled as part of the project were also profiled on the front page of Wikipedia itself (Elizabeth Truswell, Helen Fricker, In-Young Ahn, Ingrid Christensen  and Lois Jones). Wikipedia was chosen as a platform because of its broad public reach, and its ability to raise the profiles of accomplished women outside of the national, scientific, and disciplinary circles in which they have been known.

The “Women of the Antarctic” wikibomb event saw 170 nominations of Antarctic women, with the researchers coming from 30 countries. Following editing and verification processes, 96 new Wikipedia pages were created and launched, and a further 20 pages were improved upon. This has helped to make leading female Antarctic researchers more readily searchable, and put their achievements in the media spotlight. The project was officially launched on August 23, during the Scientific Committee on Antarctic Research Open Science Conference (Kuala Lumpur, Malaysia), and has gained international attention through the media and universities, and reached a wide scientific audience thanks to a letter in Nature (10 August 2016).

This wikibomb event was a successful celebration of female Antarctic researchers, and helped to raise the profile of many women who have long been leaders in their fields.  As early career researcher Morgan Seag put it, “My generation of early career Antarctic researchers is privileged to be able to take women’s access to Antarctica for granted. For that, we have to thank a generation of trailblazing women who insisted on our right to equal access, and who embody the tremendous contributions that women make to Antarctic science.”  Now the stories of those trailblazers are available in a readily accessible format, ready to inspire the next generation. The wikibomb’s legacy will continue, with new pages being added on a regular basis by those who have acquired Wikipedia editing skills over the course of the wikibomb. To learn more about the range of Antarctic women who have been now been profiled, check out the list of Wikipedia biographies here: https://en.wikipedia.org/wiki/Wikipedia:Meetup/SCAR_2016

The 2016 “Women of the Antarctic” wikibomb event was organised by Jan Strugnell, Thomas Shafee, Nerida Wilson, Craig Stevens, Justine Shaw and Jenny Baeseman, with the help of Women in Red, and 27 volunteers.